The NIA Director, Manuela Seiberth, loves cooking and got asked to cook something traditionally German for the new edition of the Resident magazine. Read the full article and recipe below.

She packed light and set her coordinates for Australia. ‘I had a one-way ticket from Frankfurt’, begins Manuela Seiberth, who just finished Political Science and International Relations degrees, six years of study in Germany, Norway and USA and a year learning Arabic. ‘I specialised in peace and conflict and was supposed to go to Afghanistan as an human rights worker but realised it wasn’t for me’, adds Manuela, who was a little overwhelmed when she landed in Sydney on April 3, 2009.

‘I was once terrified of flying so after a 22-hour flight and no sleep it took some time to comprehend where I was and what I’d done. But I made friends, started travelling and fell in love with Australia’. However, the best was yet to come. In 2011 Manuela drove from Townsville to Darwin. ‘This place is amazing, I thought to myself. Then the wet season hit. I only had a bike at the time and looked like Batman with my full-body raincoat flying behind me. But before the next wet I bought a car. Now, I’m living the Australian dream, have my citizenship, a house in Palmi (Palmerston) and run my business, Northern Immigration Australia, as a registered migration agent’, enthuses the girl from Meckenheim, a village in south-west Germany known for vineyards, wine festivals and Mother Nature.

‘Haßloch Forest is one exquisite place where my grandmother, Oma, and I would go on walks together. She’s still fit and a wonderful cook as is my mum’, two people who’ve influenced Manuela’s culinary ability to create dishes like Rouladen, wintery cuisine traditional to her state, Rheinland-Pfalz.

Method:
Season the steaks with salt and pepper. Spread mustard thinly over steaks. Put sliced ham and onions on steaks. Roll
up to make parcels and secure with toothpicks.
Add four tablespoons of oil in a cooking pot on high. Brown the roulade.
Add butter, diced onion, crushed garlic and diced bacon.
Add tomato paste, beef stock and red wine.
Add flour to thicken the sauce if required then cook gently, either on the stove or in the oven at 170°C for 2 hours
until tender.

Traditionally the dish is served with dumplings and red cabbage. 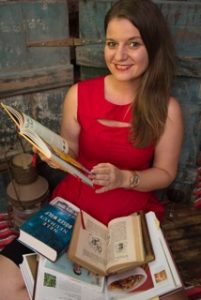 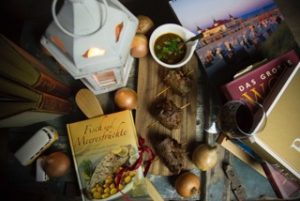 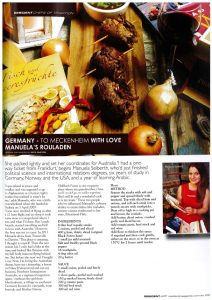