Are you thinking about migrating to Australia? Or maybe you are already here on a temporary visa wanting to stay permanently. Or you have family and friends who are wanting to live and work in Australia.

Australia is a beautiful and safe country with a prosperous economy. It’s one of only a few nations who has overcome the Global Financial Crisis with very little damage and its economic growth is persistent.

The Australian Government claims that its ‘managed immigration program’ is the hallmark for its success. Though the current political landscape appears to develop a tendency to make it harder for people to migrate to Australia.

However, the figures for the actual net overseas migration (NOM) are below 800,000. 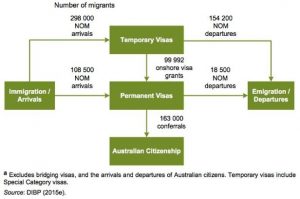 So if we deduct departures from arrivals and exclude short-term visitors like tourists, the chart below shows, the trend over the last few years has been for the net number of migrants to decrease. 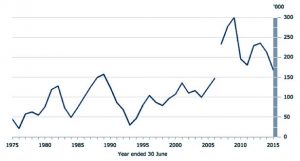 The chart shows that in 2014-15 the net overseas migration was only 168,200 people and not 800,000. And yet, members of the Australian Parliament calling for immigration to be stopped, or at least cut. Some politicians are blaming migrants for the strains on the health care system, schools, traffic and housing affordability.

In particular, the 457 visa program for temporary skilled workers from overseas is under fire, especially with regards to its integrity. As a consequence, in early March 2017 the Australian Government has ceased Labour Agreements with the fast food industry to employ foreign workers under 457 visas. Read the full article here

There are suggestions that more drastic changes to the 457 visa program will be introduced.

Additionally, the family migration program is under attack. For instance, the Department of Immigration advised it will become harder for Australians to sponsor their partner from overseas. Read the full article here

Australian immigration comprises a highly sophisticated visa system which is constantly evolving. Currently it offers more than 100 visa types which all have different requirements.

Do you have questions about the Australian immigration system? Do you want to apply for an Australian visa and don’t know what to do? Contact us now! Our migration specialists are here to help you, your family and friends!